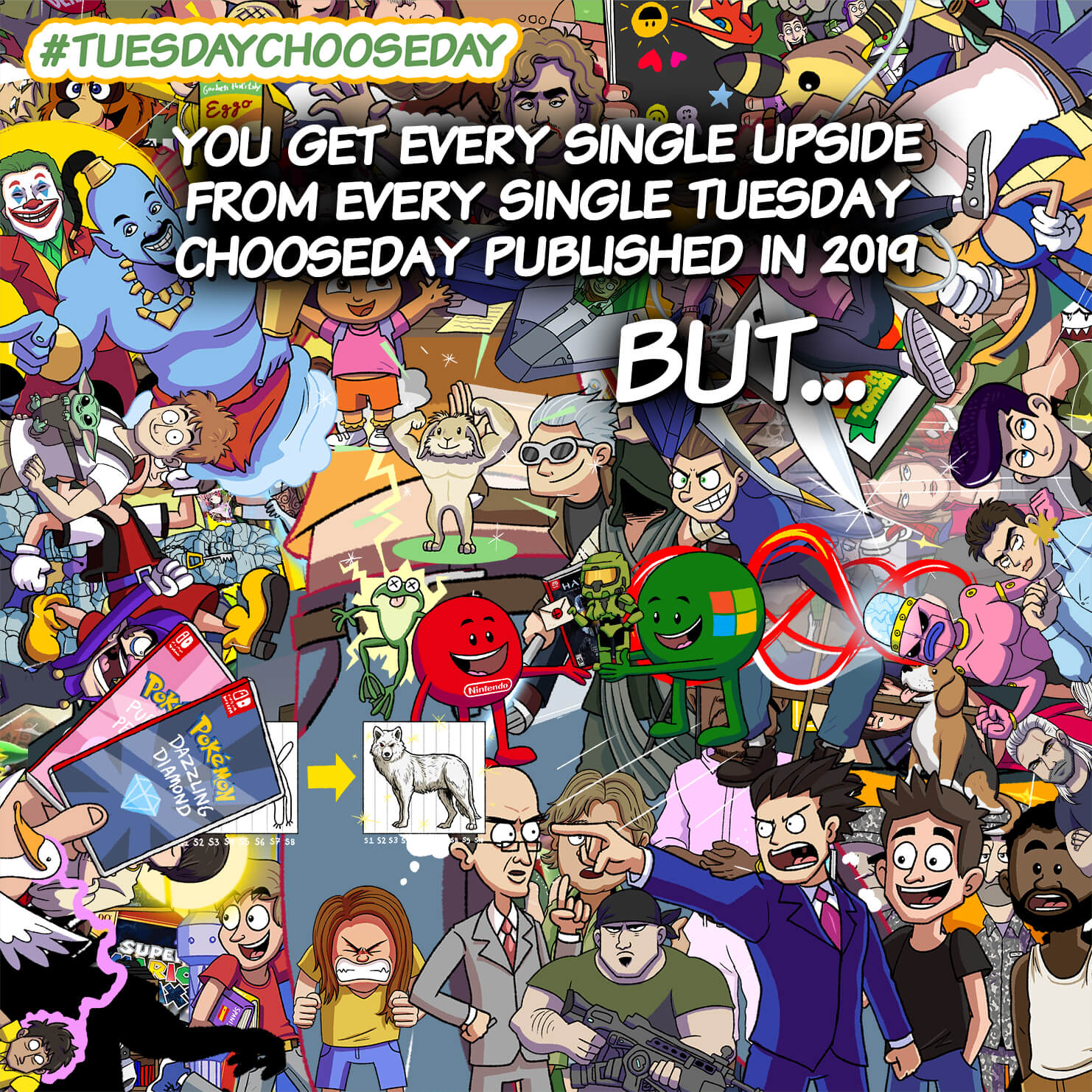 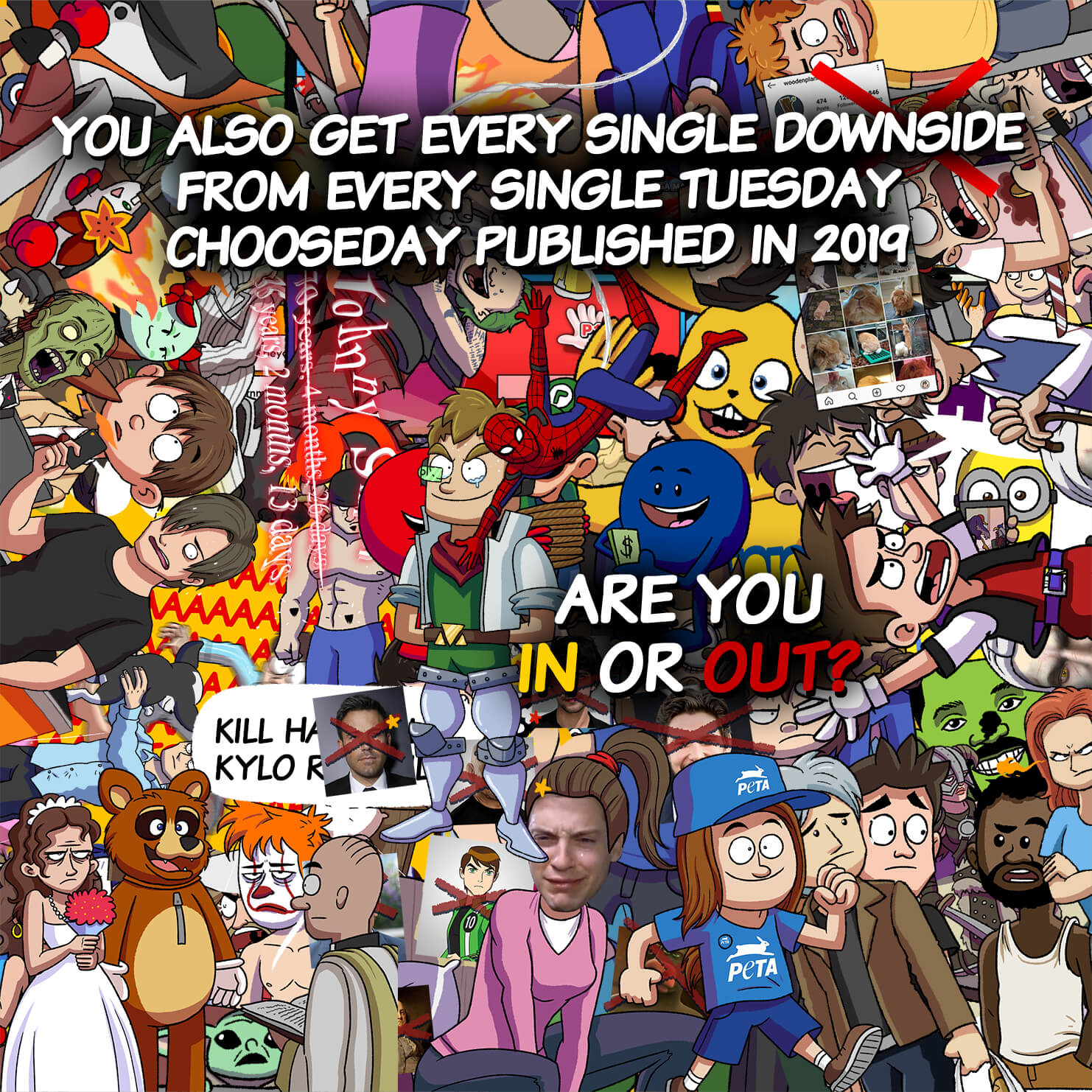 These are all the upsides combined:

You get every game you want for free. You get the ability to fly if wearing a Tanooki suit. You get Spider-Man’s web-slinging powers. You can create portals to Disney worlds. You look like a Resident Evil character (so incredibly handsome). You get a personal Hyperbolic Time Chamber. You get a ‘Death Note’ that makes the person whose name you write live a healthy and happy life. You also get a spaceship! Steven Irwin comes back to life! You get the ability to shapeshift into anything you want. The Halo Master Chief collection comes to the Nintendo Switch and Master Chief comes to Smash. The Sinnoh remakes are announced and released tomorrow and they’re crazy good. You become a badass samurai as well. You can freeze time during an argument to look up facts and prepare your next line. You become force-sensitive. You can choose the remaining Smash DLC fighters. Korg and Miek become your gaming buddies. The Sonic movie turns out to be very good. Reality is altered so that Game of Thrones didn’t become the dumpster fire it now is. Every dog you own lives forever. You get America’s ass. Will Smith grants you three wishes. You’ll get an X-Men power of your choice. You can talk to toys. Breath of the Wild 2 will have three playable protagonists: Link, Zelda and Ganondorf. Waluigi will come to Smash. You get the psychic abilities of Eleven from Stranger Things. ALL 800+ Pokémon are available in Pokémon Sword and Shield. You can hide in any painted surface. You can port any old Nintendo game to the Nintendo Switch. You’ll never feel anxiety anymore by saying hakuna matata. You’ll learn a new language of your choosing, instantly! Spider-Man is returned to the MCU (he already is). Next to the Tanooki suit and the spaceship, you can also hold on to a balloon to fly. You’ll get as ripped as a Gears of War character. You get a Stand! You can warg into geese! Everyone will always laugh at your jokes. Your bones will become unbreakable. Half of the time, you’ll look like Geralt/Ciri from the Witcher 3! You can Dynamax! You can phase through walls and other solid objects. You can make a tree sprout wherever you point. Norman Reedus will carry you everywhere you want to go. You can run as fast as Sonic. You’ll never be bothered by cold temperatures again. You get a baby Yoda to love and take care of. Your hair will always look perfect and Balthazar will get well and live a long and happy life.

These are the downsides combined:

Your favorite game is deleted from history. You’ll have to wear the Tanooki suit to serious occasions. You can never see, hear or touch anyone named Ben(jamin) again. You have to explain the Kingdom Hearts plot to a random senior every weekend. 50% of the world’s population looks like zombies to you. If you ever use your Hyperbolic Time Chamber, someone will have sold all your possessions. Your lifespan is halved. Your legs are amputated. You can only consume media from the 90’s. Luigi gets sold to Microsoft. Every generation 4 starter Pokémon and legendary Pokémon becomes Fire/Fighting type. If anyone ever tells you: ‘You lack honor, samurai’, you’ll commit suicide. Whenever you lie, someone will notice and call you out. You’ll face become wrinkly like Palpatine’s. You can’t play with your current Smash main anymore. You’ll have to officially change your name to Noobmaster69. There will be a Detective Pikachu where Pikachu looks like a man in a tight fursuit. The dragons in the new (not-trash) version of Game of Thrones are not CGI but sock puppets. Keanu Reeves will ALWAYS be watching you. You’ll get a huge beer belly. Every fictional character will look like Will Smith to you. All the redhead girls in the world will become your personal nemesis. The Toy Story franchise is sold to Illumination and they’ll immediately make a Toy Story x Minions crossover. The voices of Ganondorf and Zelda in the Breath of the Wild sequel will, for some reason, be swapped. Banjo-Kazooie is removed from Smash again. You’ll always have to wear Sailor Steve’s outfit from Stranger Things (this overrrules the PETA clothes). All 800+ Pokémon in Sword and Shield have Zubat’s color scheme and cry. You’ll always smell like fried squid. Your controllres will always be covered in Cheeto dust. Every morning you’ll be awakened very roughly by the Lion King intro song. Every day, there’s a 5% chance a fox will steal your phone. Spider-Man will shoot webs from his butt now. Every time you sleep, you’ll wake up in full clown make-up. Everytime you get near a locust, a soul patch appears randomly on your body. Every dog in the world will want to fart in your face. Your laugh sounds like a goose honking. You’ll have to get Jared Leto’s Joker tattoo’s. Everytime you see your own reflection, you’ll see a spoopy skeleton. Half of the time you look like Geralt from the first Witcher game. There will always be three clouds floating around your head that look like turds. If someone looks you in the eye, you’ll become completely unable to move. You can never nut again. You can never fast-travel or teleport in a video game ever again. Your eyes melt together into one huge eyeball like Sonic’s. Everytime you sneeze, you’ll have to sing Let It Go. Baby Yoda will spoil every movie you’re about to watch. Everytime you use public transport, someone will lick your cheek. Wooden Plank Studios turns into a Balthazar fan account (but the comics and TDCDs will still be there as well).

A few thougths: newer TDCD’s overrule older, so you won’t have to wear PETA clothing, but you do have to wear Sailor Steve’s outfit. You’ll become extremely OP: you can run fast, phase through walls, you’ll have psychic abilities, et cetera. The Skrull shapeshifting negates ALL the downsides related to your appearance because you can change into whoever you want. You’ll get three wishes from Will Smith and you can use them to eliminate three downsides. I think I’d at least get the remaining half of my lifespan and my legs back.